Trending
You are at:Home»Apps»You can Fool your Family and Friends by a Fake Relationship Now!
By Drew Brinkmann on February 3, 2015 · Apps

For singles who are tired of their family and companions asking them whether they have met that “special someone” there are two new applications that could help them fake a relationship. The Invisible Girlfriend and Invisible Boyfriend applications will also has a feature of sending convincing instant messages and even voice messages from a virtual special someone as “evidence” of a relationship. The app is created for the single adults who are always under pressure to start dating someone they like, yet who don’t want to go on a date, can work on being a flirt, or just use the application to keep those relatives off their back.

A very famous dating website says  “Invisible Boyfriend provides for you genuine and social evidence that you’re seeing someone  regardless of the possibility that you’re not – so you can return to life you are living on your own terms and conditions.” As of now accessible as a private beta version in the US and Canada, the users will have the capacity to download a specific gender application and begin getting messages from a fake partner, for around $25 a month.

The monthly membership will incorporate 100 instant messages, 10 voice messages and even a hand written letter. To start with, they will choose a girl friend or a boy friend from a “library” before modifying the identity and choosing how they might want to interact. They will be able to share photographs and can tell a good believable story to their family and friends about how they met, which can be devised on the application, you can even browse situations, for example, a bar, any event or a holiday!

The thought behind this app is that single people can show those love messages to their loved ones in order to avoid awkward social circumstances. 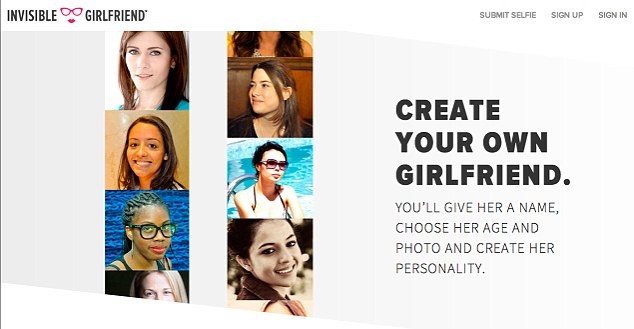 “To describe it in a simple way, this app helps you make trustworthy, sensible stories that you can bring home to the most curious mum of yours, your friends, and family. These stories are backed by genuine social proof” the app creator says.

The applications happened in light of the fact that the co-founder Matt Hoffmann was recently separated from his wife and is tired of feeling pressurized to date again. He explained in a blog post “On Thanksgiving, my mum called me and inquired as to whether she should set an additional spot for someone I’m bringing, At that point I acknowledged how great it would be to have a good answer for her that didn’t require me to really be dating somebody.”

The idea of virtual partners won a start-up rivalry, which urged the two founders to create the applications. From that point onwards, they have worked out a method for making the instant messages sound genuine so the users can message their virtual partner and get a quick reply.

In future the organization is taking a shot at an approach to give virtual partner a face. The founders think their applications meet a universal issue of society putting pressure on single individuals to be seeing someone can be utilized when somebody begins dating too.