Trending
You are at:Home»Electronics»Computer»AMD Will Release Kaveri APU On The 14th Of January
By Katherine Husmith on November 15, 2013 · Computer

During the APU 2013 conference, AMD announced some extra goodies to the technological universe. One of these happens to be revolving around AMD’s Kaveri APU. This particular desktop APU is going to be branded as AMD’s flagship model and has been named the Kaveri chip. The Kaveri chip is able to perform 856 Giga Flops and has been named the AMD A10 7850 K. The base core frequency of this APU will be 3.7 GHz and it will come equipped with a GPU that has 512 shader units and it clocked in at 720 MHz.

What Should We Expect?

Kaveri will be arriving in customer desktops starting on January 14, 2014. Kaveri will be AMD’s third generation APU and will be the first ever to incorporate heterogeneous system architecture ( HSA ) features. In addition to this, it will also support AMD’s TrueAudio technology and Mantle API. The Kaveri processor will comprise up to four multi thread cores belonging to the Steamroller architecture. On the graphics side of things, the Kaveri APU will possess up to eight Graphics cores. This will help to unlock the all the 856 Giga Flops found in both the CPU and GPU. 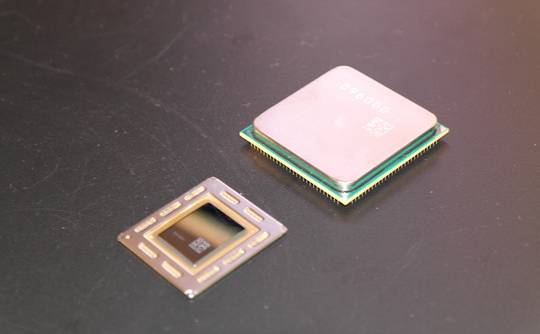 Apart from being a powerful APU, the A10 7850 K will be amongst the most energy efficient APU’s that we have seen to date. This particular APU will have a TDP ( thermal design power ) of just 95 watts so you will obviously have some overclocking headroom in your grasp to tweak the APU more to get as much performance out of it as possible. The only variable that is still obscured is the pricing. Hopefully, AMD will make this APU fit in to a more consumer friendly category rather than stamping a huge price tag on to it.

Here is the amazing thing about the A10 7850 K. It performs far better than the Intel’s processors, at least when gaming performance is concerned. To show Kaveri’s dominance over the other competitors, AMD pitted a machine running the APU processor against a combo Intel Core i7 4470 K CPU and an Nvidia GeForce GT 630 GPU. The Battlefield 4 demo was being run in a 1080 x 1920 pixel resolution setting and the A 10 7850 k was easily able to achieve twice the frame rate as compared to its adversary. Let us hope that things go AMD’s way this time.