Just a few years back, we people used to have bulky systems on our tables which consisted of a separate CPU, Monitor keyboard, mouse and speakers along with metes long connecting wires of the peripherals. Thanks to the modern technology that we have got rid of those systems. Now those bulky systems have been replaced by the All-in-One Desktop PCs in which a single device contains all the above mentioned components. Every now and then, a new model of All-in-One Desktop PC released in the market and a recent entry to this category is the PX35t-A2306 by Toshiba. The price of this PC is $1,191.99 which is nothing when you analyze the specs and performance of this device. This device is capable enough to keep on serving you for at least five years without requiring any creating any problem. 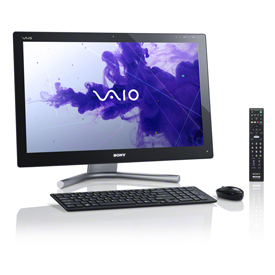 Due to its large screen size, the PX35t-A2306 looks like a 23 inch HDTV. Watching Full HD screen movies on this gadget is not a problem as it has got a screen size of 1,920 by 1,080. Almost all of the front façade is occupied by the screen with only that much of the bezel around the screen so that you could activated off screen gestures for example like bringing up the Charms menu in Windows 8. This sensor is quite responsive and has got many uses as compared to the IR touch display we have seen on the HP Pavilion TouchSmart 23-F260XT AIO. The built-in speakers are not very impressive and cannot produce sound of that quality which can easily fill your room but they are adequate for most of the PC uses.

The system has got a stand on which you can mount it. The screen has a decent tilt and viewing angle so that many people can view the screen at the same time. There is no height adjustment option and moreover, you cannot lay the screen for using the touch system.

Toshiba has deployed a Core i5-3230M processor inside the PX35t-A2306 along with 8GB RAM, 1TB 7,200rpm drive and Intel HD Graphics 4000. The memory and hard drive space is quite enough for fulfilling your purposes for at least five years without requiring any up gradation. Along with that, there is also a HDMI port and a DVD burner in the PX35t-A2306. Amongst the preinstalled applications in the PX35t-A2306 are the utilities like Amazon, WildTangent games, eBay, iHeartRadio, Netflixandsome Toshiba utilities.