There are rumours that Google will soon release its smart Google Watch which will run Android. Similarly we have also heard that Apple is also likely to release its watch soon. But Samsung has taken lead over the two technology titans by being the first one to release its smart watch. The Galaxy Gear smart watch is will be released on 25 September in more than 100 countries worldwide. A price tag of $299 has been placed on this device in the US. The Samsung’s much anticipated smart watch was revealed for the first time at IFA 2013. 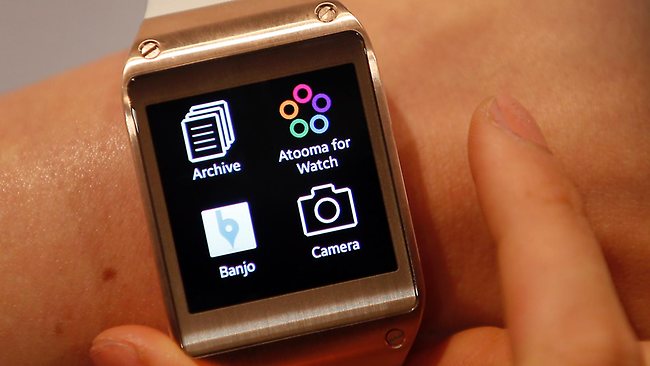 The Galaxy Gear will enable the user to answer his phone calls, check notifications and record videos, all from his wrist. The latest version of Android 4.3 will be run by Galaxy Gear. It will run apps like Evernote, Path, Runkeeper, Atooma, Banjo, Evernote, Glympse, eBay, Line, MyFitnessPal, Path, Pocket, RunKeeper, TripIt and Vivino. The device will be available in a large range of colours like Rose Gold, Jet Black, Wild Orange, Oatmeal Beige, and Mocha Gray.

The device will have 800MHz Exynos  processor in it with 512 MB RAM. That much amount of processing power is quite enough to Android 4.3 on the device. The internal storage is 4GB but sadly the device does not have any slot for SD cards.

The screen size is 1.63 inches with Super Amoled display quality having resolution of 320×320. The display is square shaped and I think that 1.63 inch screen size is quite enough for displaying all the requisite information on it.  The Galaxy Gear has a 1.9MP camera with a BSI sensor in it. The camera can shoot HD videos. There are two microphones and one speaker in the device.  The device will also run S voice which means that you will be able to control the device but just speaking out what to do.