Trending
You are at:Home»Gaming»Deathstalker Ultimate Keyboard for Gaming
By Jawad Latif on July 23, 2013 · Gaming

The main difference between a traditional and the Deathstalker Ultimate keyboard is that instead of the numeric keypad, it has got a 4inch touchscreen. It also got 10 customisable OLED macro keys along with five generic macro keys. The keys are of Chiclet-style and have got back lights which are user customizable. In this way you can illuminate your keyboard in the way you want. The USB port of the Deathstalker has polling rate of 1kHz. In this way the USB connection is very fast and eliminates the input lag. Five macro keys have been placed on the left side of the keyboard which executes a particular function when one of them pressed.

The 4 inch touch screen instead of the numeric keypad 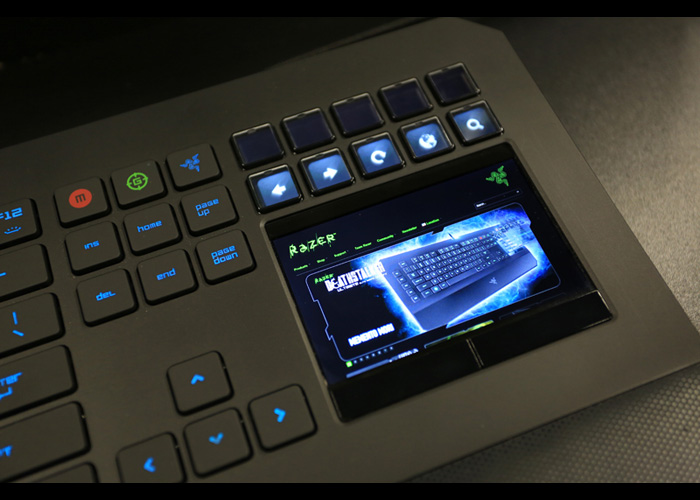 This is a keyboard which has been designed for the gamers. It is very slim and has got a wrist rest also which is covered with rubber so that the gamer can place his hand comfortably on it. The keys are quite spongy and are not very responsive if you use this keyboard for typing. The most unique aspect of this keyboard is the big 4inch touchscreen. The screen produces very clear colours and also looks very sharp. The touchscreen is of the same type as you see on the smartphones. It also works as a touchpad. Two buttons have been placed under it for left and right clicks. There are some preinstalled applications in the touchscreen and allows you to see your social network updates or browse the web without having need to stop what ever you are doing on the screen of your PC.  This is a very good functionality but I think that while playing a game, a gamer would like to use his smartphone for web browsing than the touch screen of the keyboard.

There are custom apps designed for games in Deathstalker which supports all the major games. Moreover, Razer has also released an APK that allows a developer to build an app for a game of his choice. Each gaming application assigns some specific functions to the 10 OLED  macro keys and to the touchpad. The application also loads some dynamic images on the touch screen which keep on changing according to your position in the game. Deathstalker also gives you the option of labeling the keys with text or icons and this makes it quite easy to keep in mind that each key performs which function.