Trending
You are at:Home»Mobile»Why Cloning Samsung Landed LG in Trouble!!
By Drew Brinkmann on October 31, 2014 · Mobile

LG, Life’s so good is a company that has established brand name and market in terms of Televisions, Laptops, and tablets. The company has recently jumped into Smartphone market, but here seems bad luck is chasing LG. Apart from its well-structured positioning and high intellectual staff, there seems nothing to worry about.

But then the game started to turn completely when at the end of first quarter of 2012, LG lost its fourth position in overall Smart phone market beaten up by a Chinese company named ZTE. If we review the facts then, LG was able to ship around 13.7 Million devices all over the worked in the first three months of 2012, 44.1% less than ZTE that shipped around 19.1% Million devices boosting its market by 27% as compared with last year’s data.

Even Nokia has Beaten LG!

Now let’s come to even recent details, in the second quarter of 2012, LG’s saw a huge decline in shipment of its devices to 13.1 Million. Now let’s come to the real bad news; 44% of those devices were smart phones!! Can you believe this? But yes that’s the sad part as this decline shows LG was able to ship only 5.75 Smartphones. To make a fair comparison, Nokia shipped around 6.2 Million Smartphones, Blackberry was able to sell 11.1 Million Smartphones with the help of Research in Motion during the same quarter. 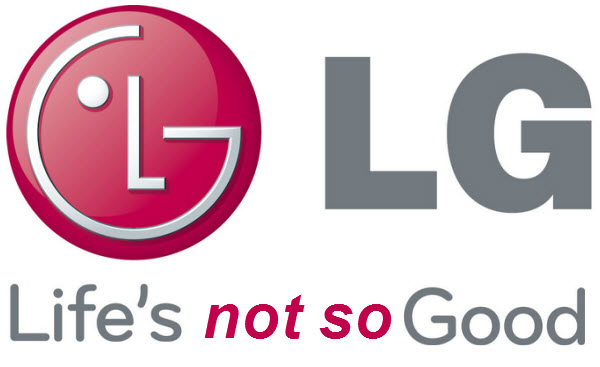 Reasons Why LG failed in Smartphone Market So badly!!

The main part is none but LG’s Software. If Samsung’s Touch Wiz is a direct copy of Apple’s iOS, then it is fair to say LG’s phones are a direct clone of Samsung.

Rumors are that LG upcoming phone Optimus G would be similar to Nexus. Results literally showed sales of Nexus G to be greater than Optimus G thus nailing this Giant greatly.

If we look it from neutral prospective then it is fair to say, Cloning in today’s world doesn’t exists. If you need a big show, then show something innovative. Taking other rights and copying their stuff is quite un-ethical in today’s digital age and liberal economy.

For LG, it all started with bad timing and poor design with the added bad luck of cloning. Like, we do understand it depends on fate as well. See how Samsung first copied Apple’s technology but then Samsung came up with better style, good physique Smartphones thus beating even the giant of this market, Apple.

In a nut shell, things can for sure change if it start taking their customer’s feedback seriously. Take example of Blackberry, how it suddenly re-entered in the market and with good efforts grabbed 1% overall market share. Up till yet, all we can hope is better future for a big player of Electronics to boom again in Smartphone Market as well!!