Using Smartphone has become a trend these days. Almost everyone owns a smart phone and loves to use it all the time. You will see every next person holding a Smartphone in his hand or may be carrying it in his pocket. There are so many different kinds of handsets that you can get as per your choice and taste. Mobile companies are making so many designs with a lot of variation in technology and other specs. Recently Vodafone has released its smart phone with a name of Vodafone Smart III 975 back in December 2013. And with that short period, this handset has made so many admirers already. If you are thinking to change your handset in near future then you should look here on its specification. 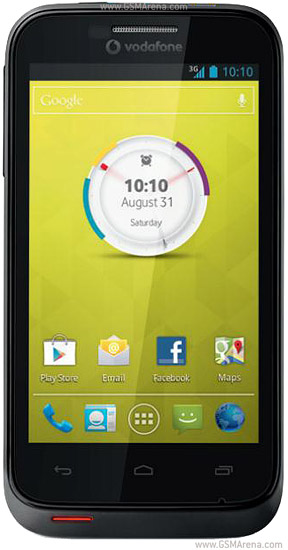 To let you hold this handset with ease and comfort, the team at Vodafone has made it only 123.2 mm long and 64.4 mm wide with a thickness of 10.9 mm so that you wouldn’t feel any difficulty by holding it in your hands. Plus, this only weighs 136g and allows you to take it anywhere with you without worrying about the weight.

Enjoy its 4 inches big screen with TFT capacitive touch screen and a 480×800 pixels screen resolution on your Vodafone Smart III 975. Additionally, there is a multi touch function added in the mobile so that you can enjoy surfing anything on your handset.

Keeping your personal data within your handset is a common trend and to fulfill this requirement, which has become a basic need of every next person, they added a 4GB internal memory with 512MB RAM in it. Or alternatively you can use a microSD card of up to 32GB capacity if you want more room to store your personal data.

Enjoy your apps and internet on Android OS v4.1 Jelly Bean along with Mediatek MT6575 and explore as many new apps as you want on your handset.

Taking pictures is a hobby of every next mobile user these days. And for this very purpose, there is a 5 mega pixels camera on your Vodafone Smart III 975 so that you can take as many pictures as you want or for making long videos on your mobile with autofocus, Geo-tagging and LED flash.

“Despite these few negative points, this handset is a really nice deal. Enjoy its awesome and attractive color range.”